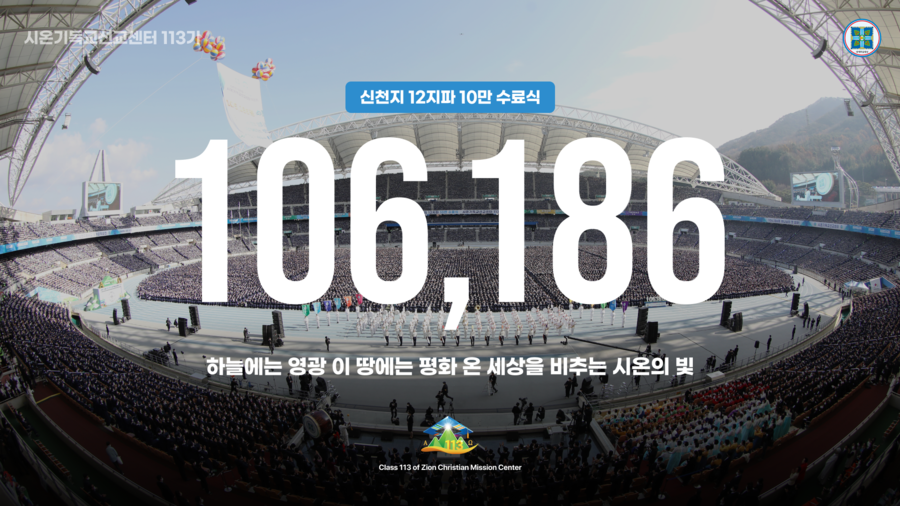 The Bible education institution of Shincheonji Church of Jesus, called the Zion Mission Center, has enrolled and graduated an unprecedented number of people for the second time since 2019.

DAEGU, KOREA, December 05, 2022 /24-7PressRelease/ — The 100,000 Graduation Ceremony held by the Shincheonji Church of Jesus, Temple of the Tabernacle of the Testimony, was carried out for the first time in three years due to the recent pandemic. The theme of the event was three-fold: “spreading the word, awakening pastors, and ensuring safety”.

Shincheonji Church of Jesus held the graduation ceremony of the 113th class of Zion Christian Mission Center on November 20th at the Daegu Stadium in Suseong-gu, Daegu, with a total of 106,186 graduates around the world. Over 1,600 of the over 100,000 graduates were pastors of Christian churches.

The event held in the Daegu Stadium hosted 80,000 graduates (the rest were in other locations around the world). Shincheonji worked closely with the local governments, and police and fire departments to ensure the safety of the attendees, especially in the wake of the recent crowd-rush incident in October in Seoul that left over 100 people dead. The graduation event had over 14,000 personnel dedicated to safety, and the departure and arrival times of graduates was staggered to prevent crowding. The event was completed without a single safety accident.

This graduation is not the first time that Zion Mission Center has produced over 100,000 graduates worldwide. In 2019, before the pandemic, 103,945 people graduated from the Mission Center. Christian leaders in Korea and around the world are noticing a major shift in the way people are streaming to Shincheonji because of the word and teaching that cannot be found anywhere else. This year’s slogan for the graduation ceremony was: “Glory in Heaven, Peace on Earth, and the Light of Zion Illumination the Whole World.”

Across the Christian religious community, there has been a noticeable decline in the number of believers due to many factors, the pandemic being one of them. As Shincheonji Church is growing rapidly, even during the pandemic, the religious world has been watching closely.

The Zion Mission Center courses have been made available online through YouTube seminars over the past 2-3 years. The courses include the Introductory Level, Intermediate Level, and Advanced Level which emphasize the importance of the Word and repeatedly asks students to check and judge for themselves. Because of this, existing believers and even non-believers have become greatly interested in the word taught by Shincheonji Church.

The content of the Zion Mission Center courses is focused on the gospel that fulfilled the Old Testament (Jesus’ first coming) and the prophecies of the New Testament that can be clearly explained as they have been fulfilled and made way for believers to come to the place teaching the entire Bible in a cohesive and clear way. Many pastors who have received this word and course material have signed MOUs with Shincheonji Church in order to teach the material in their own churches.

One pastor participating in the graduation ceremony stated: “I studied theology all my life, but I never understood it. I learned the words of Shincheonji and understood God’s work of salvation throughout the Bible. There is no other place in the world that testifies so clearly about the book of Revelation.”

Shincheonji Church did not just host the graduation event in Daegu, but also made a point to contribute to the revitalization of the local economy and serve the local citizens. Transportation and meals consumed by the 100,000 graduates certainly helped to provide practical help to the citizens of Daegu.

In Rv. 22:18-19, it is written that if people modify the book of Revelation, they cannot go to heaven. The only person in the world who has mastered of the 66 books of the Bible, including Revelation (without adding or subtracting), is a graduate of the Zion Christian Mission Center.

At the Zion Christian Mission Center, the evidence seen and heard of the fulfillment of the prophecies of Revelation bears witness to the actual events according to the Book of Revelation. The Zion Christian Mission Center operates free of charge for all educational courses to its students. This is to fulfill the words of Rv. 22:17. Jesus also told His disciples to give freely because they received freely (Matthew 10:8).

What does someone have to do to graduate from Zion Mission Center?
Zion Christian Mission Center students must complete all Introductory, Intermediate and Advanced courses and pass the final exams for each course. After that, only those who take the final completion exam and pass with a total score of 90 or more are eligible to complete the course.

What are the Introductory, Intermediate, and Advanced – level courses?
The final goal of the Zion Mission Center is to realize the true meaning and reality of the events in the book of Revelation. In the Introductory course, the parables of the secrets of the kingdom of heaven and their true meaning are taught (John 16:25), laying the foundation for understanding the book of Revelation. In the Intermediate course, students learn representative and important chapters chapter-by-chapter in the Old and New Testaments. In the Advanced course, students learn about the prophecy and fulfillment of God’s new covenant, the book of Revelation, based on the principles of the reality that has taken place.

After opening the Zion Christian Mission Center in 1990, the center graduated its first 12 students in 1991. Since then, the number of graduates has increased exponentially every year. In the 2000s, the number of graduates increased to 2,000 per year, and in the 2010s, the number reached 10,000 per year. Since then, it has grown by leaps and bounds, and in 2019, 103,945 students completed the program, making it the largest graduation in the world. During the COVID-19 period, in 2020 and 2021, about 20,000 people completed the online course on an average year, and about 40,000 people completed it for two years.

A former pastors’ testimony – “God’s Word has the Power of Life and Re-creation”
The biggest feature of the 113th class graduation ceremony of Zion Christian Mission Center was the pastor graduates. According to Shincheonji Church, there were a total of 1,680 pastor graduates, including 37 in Korea and 1,643 overseas, making it the largest number of pastors at the graduation ceremony ever.

Shincheonji Jesus Church said, “In the past two years, non-face-to-face life has become commonplace due to COVID-19, and Shincheonji Church has also switched its offline center to online and released all mission center talks on YouTube. We believe that because people can learn the Word without being conscious of the eyes of others, pastors have become interested in Shincheonji word without any pressure.”

The two people who presented the graduation statement on the day are both former pastors. Mr. Heo Jung-wook, who presented his remarks as a representative of Korean graduates at the graduation ceremony, was a second-generation pastor and current pastor. “I only learned traditional theology in seminary, but I didn’t know much about the book of Revelation. I have taught only those words that are easy to preach to the saints, leaving out difficult words. I repent that I was a sinner who had changed the word of God.”

Mr. Heo said, “Pastors, what we really need to teach our people is to teach God’s will correctly, not service or praise. All the believers who are thirsty for the word are flocking to this Shincheonji Church. We are all humbled and born again. I laid down all my possessions and came before the truth. I learned and completed real theology that leads to heaven, not human learning. I thank God for giving me a chance at life.”

Dee Jackson, a representative of overseas graduates, is also an Indian pastor who signed an MOU after receiving online Bible classes from Shincheonji Church in October last year.

“I immediately started preaching to spread the ‘Secret of the Last Trumpet of the Kingdom of Heaven’ in the Book of Revelation and introduced these words to church members, fellow pastors, and friends. I changed the name of the seminary I had been running to Zion Christian Mission Center and shared these words with various people, bringing the total number of people to 294.”

Finally, he said, “Religious leaders and members around the world, please listen to the Shincheonji revelation. God’s Word has the power of life and re-creation.” 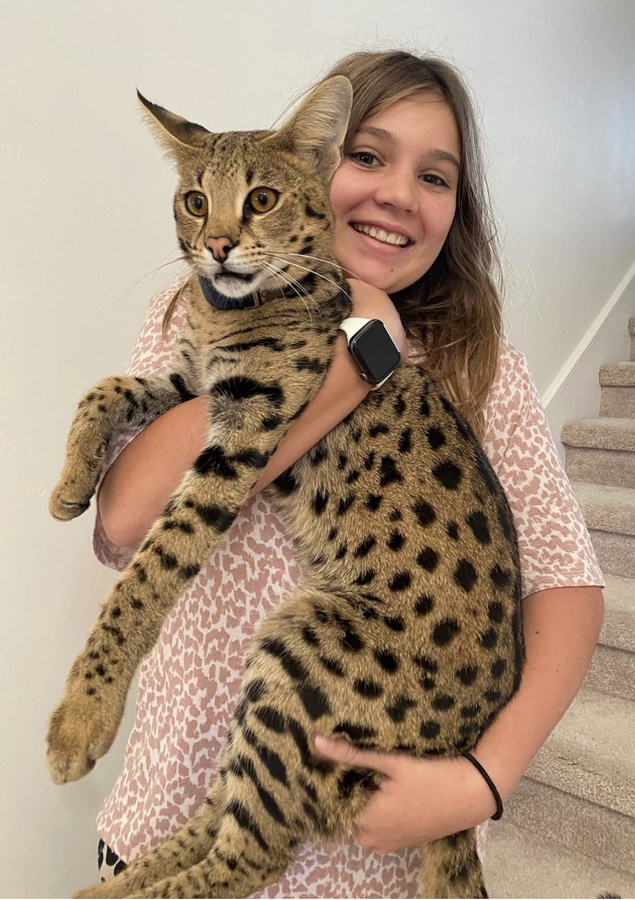 Matt Keezer on PlayStation 5 vs PC 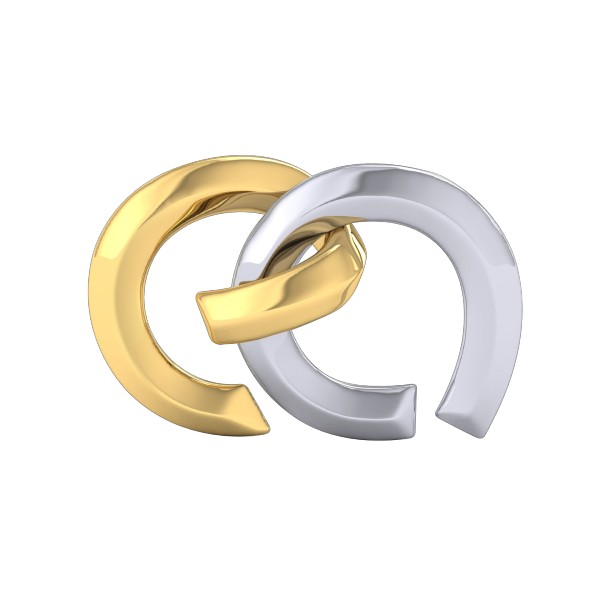 Discover a New Exclusive Brand Only at Azzi Jewelers